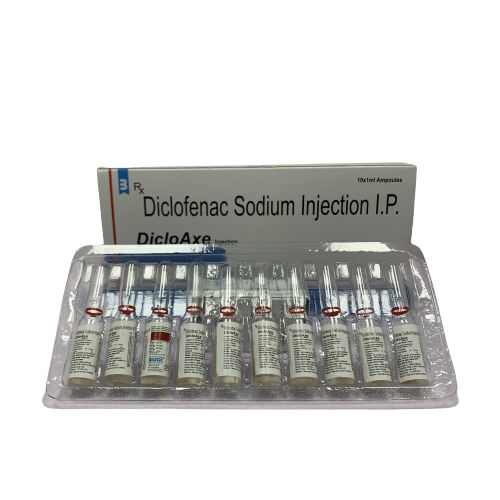 Diclofenac Sodium Injection – This injection comes with a Non-Steroidal Anti-Inflammatory Drug Diclofenac that is used to treat and relieve pain, swelling, and stiffness in joints and muscles associated with certain conditions. This injection is given in cases where oral administration is not possible or does not show any positive effects. This injection is offered in the Indian Marketplace with the brand name DicloAxe, available at the Best Diclofenac Sodium Injection Manufacturer, Supplier, and Franchise, Biotic Healthcare.

Diclofenac Sodium is a pain-relieving medication that belongs to a group of medicines called Non-Steroidal Anti-Inflammatory Drugs (NSAIDs). It works by restricting certain chemical messengers (prostaglandins) in the brain that alert us about pain and are the major contributors to pain and inflammation (redness and swelling). It prevents an enzyme called Cyclooxygenase that is known responsible for the formation of prostaglandins.

Diclofenac Sodium Injection is administered by a healthcare expert and is not advised to be self-administered. With its high anti-inflammatory action, it becomes a highly potent medicine and thus, requires proper caution during usage. Following are some of the essential precautionary measures that must be taken while taking this injection for the best results:

Diclofenac Sodium Injection acts as a potent pain-reducing medicine that does not really cause any harmful side effects if used under the prescription of the doctor. However, incorrect usage or overdosage of the medicine may lead to certain side effects in some users. These side effects are generally mild and temporary and leave the body after a short span of time. They may also occur if the body does not respond accurately to the medicine's effects.

As these side effects resolve on their own, immediate medical attention is not required. However, if they do not relieve on their own and become stubborn to handle, consult your doctor.

Diclofenac Sodium Injection is not advised to be taken during pregnancy as there is certain evidence of its risk to the fetus. However, if the advantages outweigh the possible risks, a doctor might prescribe the injection for certain life-threatening conditions. Thus, if you are pregnant, it is better to consult your doctor or gynecologist before using this injection.

There are no negative effects of Diclofenac Sodium Injection shown on babies when using it by lactating mothers. However, it is still best to take a consultation with the doctor to know if you need it.