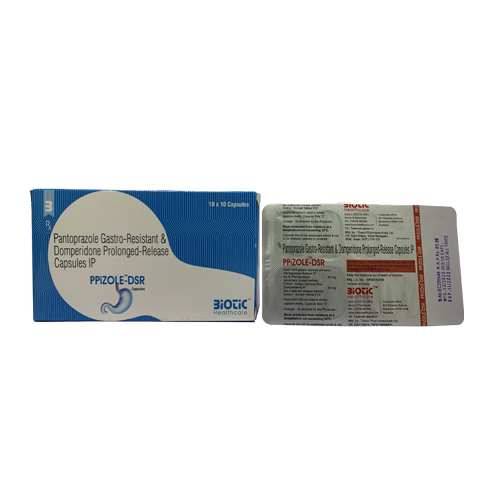 Pantoprazole (also known as “proton pump inhibitor”) primarily works against gastroesophageal reflux disease, stomach or duodenal ulcers & Zollinger-Ellison-Syndrome. It works by reducing the amount of acid generated in your stomach. In other words, this medication is mainly used to treat diseases related to stomach & intestine.

However, Domperidone is a kind of peristaltic stimulant which helps to boost digestive system movements. This ingredient is also beneficial in certain stomach related disorders. It can also be used to treat nausea & vomiting produced due to certain medications.

PPiZOLE-DSR sustained release capsules are specially designed to gradually dissolve the ingredients in the body over an extended time period so that it can be released slower into the blood stream, particularly to sustain therapeutic levels. PPiZOLE-DSR capsules can be taken at less frequent time intervals while comparing to other immediate-release medications.