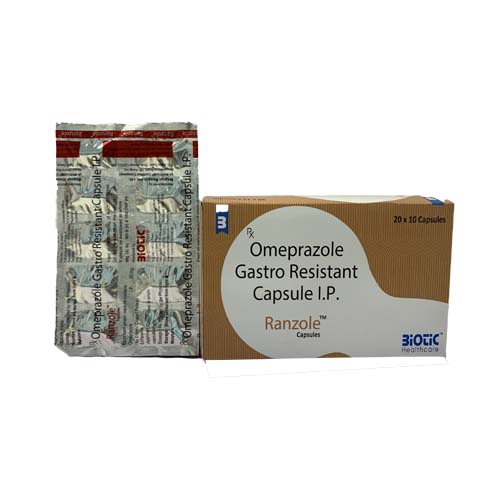 Biotich Healthcare offers RanZole Capsules containing an active ingredient -Omeprazole 20 mg which effectively works against excessive stomach acid production. This medication is also labelled as I.P. which means it is a prescribed standard of the drug approved by the authority of Indian Pharmacopeia. Omeprazole comes under a group of medications called ‘proton pump inhibitors’. This ingredient helps in reducing the excessive amount of acid produced by your stomach. It is used to heal GERD (Gastro-esophageal reflux disease), duodenal ulcer, gastric ulcer, severe heartburn and a damaged food pipe due to too much stomach acid (erosive esophagitis).

Moreover, if your physician recommends you to take RanZole capsules on a long-term basis, we recommend you to keep yourself under your physician’s consistent surveillance so that you can report exceptional symptoms & conditions.