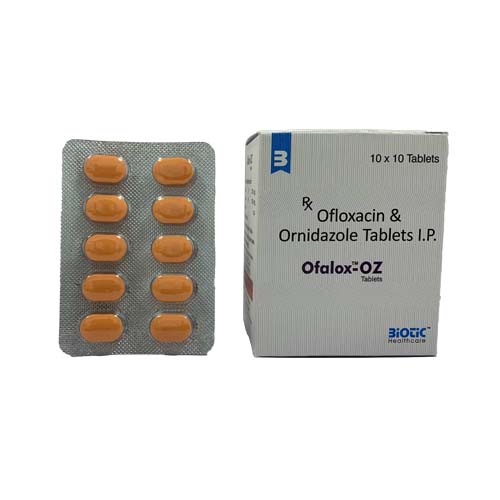 Ofloxacin belongs to a group of medications known as fluoroquinolone antibiotic which helps in treating certain kinds of bacterial infections such as ear infections and urinary tract infections. This antibiotic works effectively against such infections by inhibiting the multiplication of bacteria (by means of inhibiting the reproduction & restoration of their genetic material (DNA)).  This ingredient can also be used for the treatment of pelvic inflammatory disease (PID).

In this combination of medications, Ornidazole is effective against certain infections, mainly triggered by anaerobic bacteria (not necessitating oxygen), amoebic, and parasitic infections. These infections commonly belong to various parts of the human body such as the urinary tract, vagina, and the intestines. Ornidazole antibiotic helps in preventing these kinds of infections.

We don’t recommend Ofalox-OZ tablets to those patients who are severely sensitive to either Ofloxacin or Ornidazole or at a risk for an allergic reaction to any of these antibiotic ingredients.