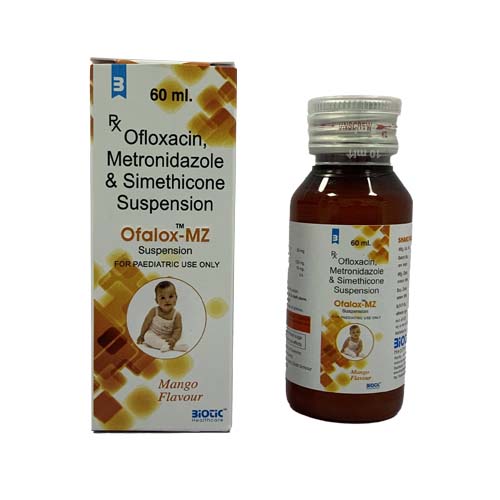 Biotic Healthcare offers Ofalox-NZ Syrup that contains a liquid suspension Ofloxacin and Nitazoxanide for oral administration. This combination of antiparasitic & antibacterial medications is primarily used for the treatment of infectious diarrhea, parasitic infections of the intestines such as Giardia lamblia and bacterial infection (like ear infections & urinary tract infections).

Ofloxacin comes under a class of medications known as quinolone antibiotic which is used to cure certain kinds of bacterial infections including ear infections and urinary tract infections. This antibiotic works effectively against such infections by preventing the growth of bacteria (via inhibiting the reproduction & restoration of their genetic material (DNA)). It is also helpful in treating pelvic inflammatory disease (PID).

Nitazoxanide (also referred by the brand name Alinia) ingredient is helpful in curing infectious diarrhea which is caused due to some kinds of intestinal parasitic infections such as Cryptosporidium parvum and Giardia lamblia. Nitazoxanide is an antiprotozoal agent or anti-parasitic agent which inhibits the multiplication of certain protozoa that cause diarrhea.

Ofaloz-NZ syrup may contain some inactive ingredients that can cause allergenic reactions or other minor health issues, so we recommend you to consult your physician or doctor about the safe usage of Ofaloz-NZ syrup before taking the dosage of this syrup.