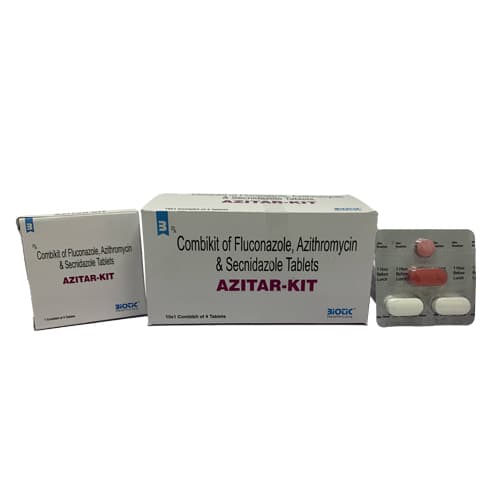 Fluconazole is an antifungal medicine that is used in the treatment of serious fungal or yeast infections caused by various types of fungus which includes esophageal candidiasis,  vaginal candidiasis, oropharyngeal candidiasis, fungal meningitis, and other candida infections such as urinary tract infections, inflammation of the lining of the abdomen or stomach), etc. The working strength of Fluconazole is to fight the fungus or yeast present in the body, prevent its growth, and ultimately kill it.

Secnidazole is also an antibiotic that is used in the treatment of a certain vaginal infection namely bacterial vaginosis, an infection caused by the overgrowth of an adverse bacteria in the vagina. It works by deterring the growth of the bacteria responsible for the severity of the infection. Secnidazole is also used to treat the symptoms of trichomoniasis, a sexually transmitted disease that can result harmful in adults for both men and women.

This combination kit is only for the treatment of bacterial infections and will not work for other viral infections like a common cold, flu, etc. It is important to use this medication under the guidance of a doctor or a healthcare expert.